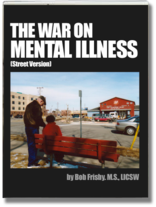 "Many of my former clients and/or their families reviewed elements of this book and gave me permission to include their write-ups... I expect this book to be highly educational and useful to students at all levels, from the college level to the doctors who are doing their residency in psychiatry... I'm writing this book to educate whoever is interested in learning more about the serious and persistent mentally ill individuals... My emphasis will be on those who have episodes of dangerousness to themselves and/or others."

​Welcome to the War Zone

Fighting the war on mental illness takes a lot of effort on the part of the client, the immediate family and the entire community. I've called it a war because it can be dangerous to those involved; mental illness can hide itself very well and strike out against those that try to get "it" under control.

I fought this war for almost forty years as a case worker on the streets of our cities here in Minnesota and at these military bases: Ft. Ord, California and the 9th Infantry Division's base camp called Dong Tam in South Vietnam. I was in the trenches so to speak, with clients who were dangerous to themselves and/or others. These clients were considered to have serious mental illnesses; usually schizophrenia, bi-polar disorder, major depression, psychosis, and borderline personality disorder; to cite just a few.

I felt it was important to share my thoughts about these years of war with those in our communities that are interacting with these people and want to learn more about it. I have a master's degree in educational psychology and counseling.

This sharing comes in the form of a book I wrote titled: The War on Mental Illness (Street Version). The book was printed in April 2013 and is available for purchase.

The book is not recommended for children under 18 and I wouldn't urge anyone to give it to a person who has less than a year of recovery. Those who are providing "peer support" should feel comfortable in purchasing this book. There is something you can give any adult afflicted with any illness and that is the Human Inventory. That inventory is basically holistic health care in a nice package. I go into more depth about it in the book and will give you a shortened version for your immediate needs. The Human Inventory is copyrighted (1983 Bob Frisby).